Type an unfamiliar term into Google, and chances are your quest for answers will cross paths with Wikipedia. With more than 470 million unique monthly visitors as of February 2012, the world’s free encyclopedia has become a popular source of information. Our team (Jackie Cohen, Priya Kumar, and Florence Lee) used network principles to explore where Wikipedia gets its information.

Our analysis suggests that Wikipedia’s best articles cite similar sources. Why is this important? Information about the most frequently cited domains may give Wikipedia editors a good starting point to improve articles that need additional references.

We reviewed the citation network of Wikipedia’s English-language featured articles to discover which categories of articles shared similar citation sources, or domains. Wikipedia organizes its more than 4,200 featured articles into 44 categories; we found that every pair of categories shares at least one domain, creating a completely connected network.

But the mere existence of an edge doesn’t tell us about the strength of the relationship, or the number of shared domains, between two categories. The two categories could share one domain or hundreds. We assigned weights to the edges to determine which pairs share more domains than others. 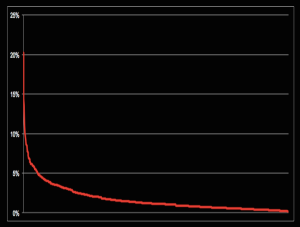 The second pair feels intuitive. We scratched our heads at the first pair and found the third pair interesting, given that the two categories often appear on different sides of various public debates. Some of the shared domains between this pair, such as slate.com, jstor.org, and christianitytoday.com, were unsurprising, but we did notice several unexpected shared domains in this pair, including brooklynvegan.com and vulture.com.

Figure 2 depicts an elbow around the edge weight of 4.6 percent. If we use this as a threshold to create the network, that is, only draw an edge if its weight is higher than 0.046, the network becomes far less connected (Figure 4).

Figure 4: Citation Network with an Edge Weight Threshold of 4.6 Percent

We also examined the domains themselves. The three most popular shared domains were:

The widespread citation of these domains aligns with Wikipedia’s encyclopedic nature; these sites are gateways into vast swaths of digitally recorded information and knowledge.

Considering the least popular domains, 601 domains were only shared between one category pair. Removing those domains from the graph only deleted four edges, since most category pairs share more than one domain. This suggests that edge weight is a better threshold for examining the relationships in this network than domain distribution.

The project can be replicated by running: grab_data.py, manage_data.py, data_counts.py. The first two files collect and parse the data we describe above. The data_counts.py file contains all the network manipulation, and, if you download the entire repository, can be run immediately (the repository includes the results from the former two files). This last file contains comments that explain where in the code we determined different network metrics and examined aspects of our network. This includes where we implemented edge weight thresholding (Figure 1, Figure 4) and where we conducted Pythonic investigations into whether the edge weight distribution was a power law distribution.